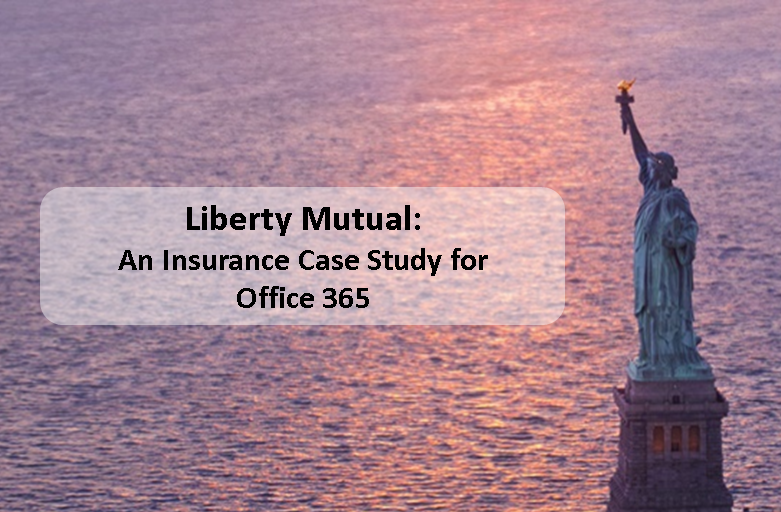 In the insurance industry, business is all about protecting valuable items of people.  This is why insurance industries need to make sure that they are using tools and technology that serve to bring their clientele sufficient protection.  This is to help make sure that their products and services stay innovative.  A good example of a company doing this in practice is Liberty Mutual.  With more than 50,000 employees and 900 global locations, Liberty Mutual is one of the few in the industry that experience business on a large scale.

This is why they have a few unique problems that they run into as a bigger insurance business.  They are forced to compete with many internet startups who have the advantage of mobility through the use of cloud-based technologies.  They also need to take care from their other competitors as well who try to disrupt their value chain and build stronger relationships with their client base.

To overcome these challenges, Liberty Mutual had to make a change, a digital transformation.  Microsoft office 365 and power BI were just the products to help them start this journey.  Office 365 improved the collaborations of their worldwide team.  They are able to share insights more conveniently, helping them with the product development process and shorten the time for breakthroughs for products the import and export globally.

Analytics is also a very important ability to have in the industry.  Office 365 has helped Liberty Mutual through faster response to market changes.  They are now moving to a more agile development process in which smaller groups from multi-disciplinary employee groups are able to collaborate on new products with more efficiency.  Chat-based real-time collaboration has increased their proportion of people across their company who normally could not collaborate with each other through regular means.  Analytic tools as well is the other way in which helped them increase their efficiency, this is where Power Bi comes in.  With just the right amount of user friendliness and high-level insights, even departments like Claims, Legal, Reinsurance and HR are able to quickly pick out information from just the dashboards and KPIs.

With new tech savvy recruits, they are now accustomed to wanting mobility compared to on-premise workstations.  They need to be able to have access to what is normally on-premise on the go, this is not only a storage concern but also security one.  Office 365 helped them as they are able to access their documents and emails on the go while still maintaining a high level of security for their employees.

To learn more about Office 365 and other Microsoft products, you may contact us at 8893-9515 and we would be happy to answer your inquiries!

Microsoft Whiteboard is now available on Web and Teams! 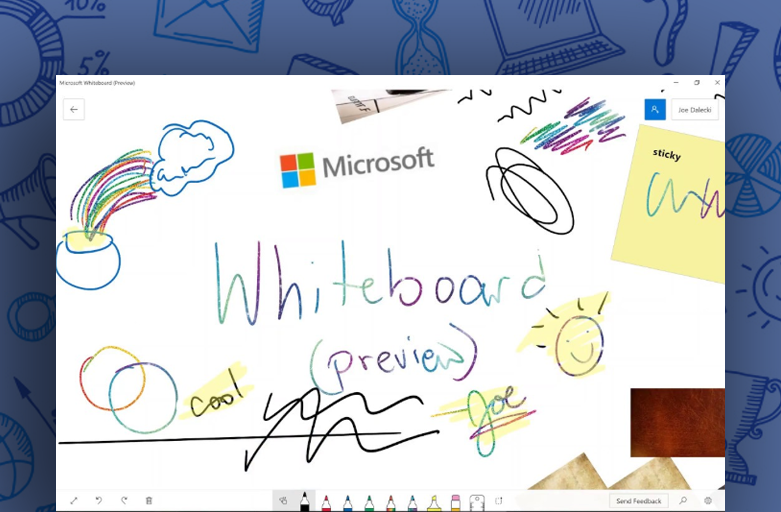 Microsoft has recently made available Microsoft Whiteboard for web for all commercial Office customers!  For those who are not familiar, Microsoft Whiteboard is an app which Microsoft hopes to help in the brainstorming process of companies and schools.  This is another collaboration tool in which can be used anywhere and on any of your devices (as of now it is available for windows devices only) in real time.  They have also provided multiple templates on Whiteboard to help you get started on your collaborations, below are the templates available on Whiteboard now:

Besides the web release, you will now be able to use Whiteboard during team meetings to better collaborate.  All you need to do is click Whiteboard under the share option and you will automatically share it across all meeting participants and start collaborating without leaving the team experience.  This helps add variety to Teams meetings for when scenarios such as diagramming, expressing ideas, capturing agenda items and follow ups and remote training are needed.

To learn more about Microsoft products, you can contact us at 8893-9515 and we would be happy to help answer your inquiries! 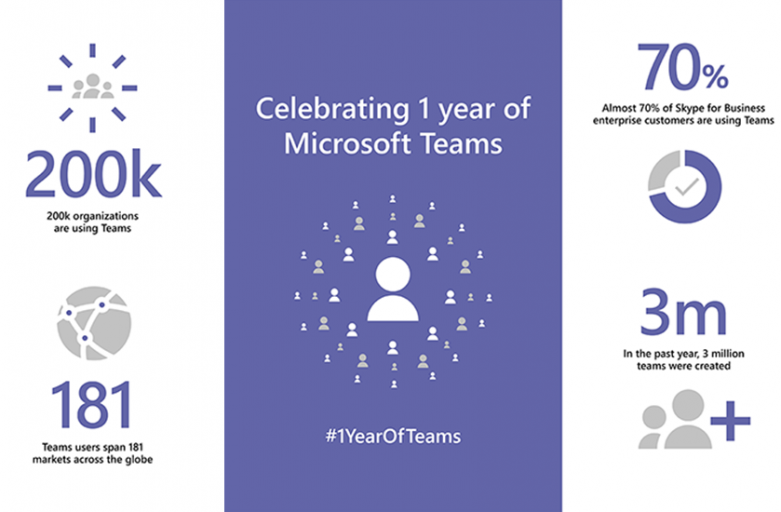 On March 12, 2018, Microsoft Teams celebrated its one year anniversary and what and eventful first year it was!  According to Microsoft, around 200,000 organizations in 181 markets (in 39 languages) are using teams to date and we can expect it to rise throughout the year with Microsoft’s additional features and updates to Teams this coming year.

Teams for Intelligent Communications and Collaboration

Being part of Office 365, Teams has been able to take advantage of many of its strength by being able to integrate with many other Office 365 applications while also tapping its 120 million user base.  Teams uniquely delivers on its many features, such as chat-based collaboration, meetings, calling (and soon, full enterprise voice features), at scale with enterprise-grade security and compliance standards to make sure that you are within global standards.  However, to improve on their vision for Intelligent Communications within organizations, Microsoft has announced that they will be implementing the following features within this year:

Cloud recording—Will provide one-click meeting recordings with automatic transcription and timecoding, enabling all team members the ability to read captions, search within the conversation, and playback all or part of the meeting. In the future, it will also include facial recognition, so remarks can be attributed to specific meeting attendees.

Inline message translation—People who speak different languages will be able to fluidly communicate with one another by translating posts in channels and chat.

Cortana voice interactions for Teams-enabled devices—Will enable you to easily make a call, join a meeting, or add other people to a meeting in Teams using spoken, natural language. This functionality will extend to IP phones and conference room devices.

Background blur on video—The ability to blur your background during video calls will allow other meeting attendees to focus on you, not what’s behind you.

Proximity detection for Teams Meetings—This feature will make it easy for you to discover and add a nearby and available Skype Room System to any meeting.

Mobile sharing in meetings—Meeting attendees will be able to share a live video stream, photos, or the screen from their mobile device.

In addition to this, Microsoft will be adding new enterprise-grade calling features in Teams which will include consultative transfer and call delegation and federation.  Another feature that will be introduced is Direct Routing which will allow you to use your existing telephony infrastructure with Teams for calling.  To learn more about this you may read the original article here or you can contact us at 893-9515 to ask us directly! 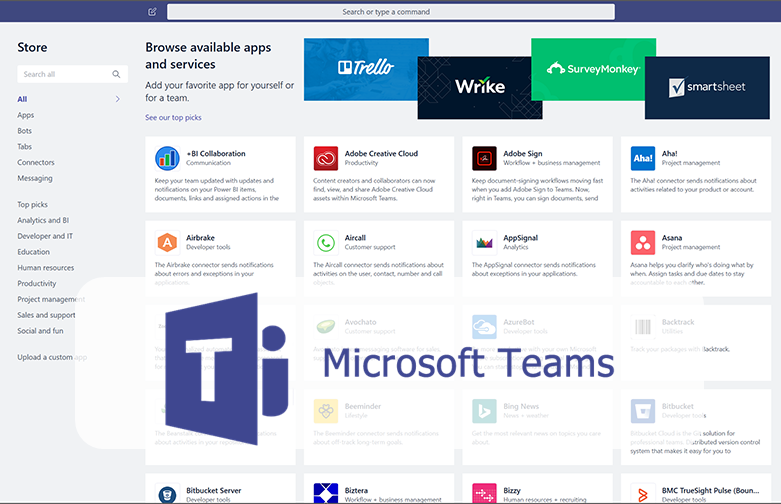 It’s been close to 10 months since Microsoft has introduced Teams in an effort to help their customers improve their collaboration within the workspace.  Through these months, Microsoft has been slowly improving Teams through their observations and user feedback.  One example of this was the integration of third party applications such as Trello and SurveyMonkey.  Even now they are still updating Teams, recently they have released a new update in which they have integrated exciting new features which will surely help your company’s collaboration efforts!

New ways to utilize your apps in Teams

Include information from an app in a conversation

Be able to discuss content from a different app directly in Teams with the latest update.  Just like putting an emoji or GIF in the chat, you’ll be able to search and post integrated app information into chat and channels.  Be able search for a specific task in Trello, a work item in Wrike, or even a weather forcast, and even integrate them it into an interactive card.

With the update, you can now easily access apps you frequently use and even see all items on those apps such as tasks in planner, issues in Jira Cloud and even conveniently find items you recently used such notebooks from OneNote.  This is made possible due to the addition of the personal apps space.  In addition, you can also find a new app in this space called Who, a new app powered by Microsoft Graph, which enables you to search for people in your organization by name or topic.

Find apps for Teams in the new Store

To make discovering and finding apps simpler in Teams by allowing users to search for apps by name, category, and integration type (like bots, tabs, connectors) in their new store.

Command apps from the command box

In the latest patch, Microsoft has added the function to query or command an app from the command box.   You are now able to search information in an app and easily place the results into a chat or channel in Teams.  More functions will be added overtime, one function they are working on is to create a task in your project management app over the Teams command box.

A convenient new function added to Teams would be the addition of slash commands to help you execute shortcuts quickly.

Contact us at 893-9515 to learn more about Microsoft Teams and how it can help you collaborate better with your own Team!