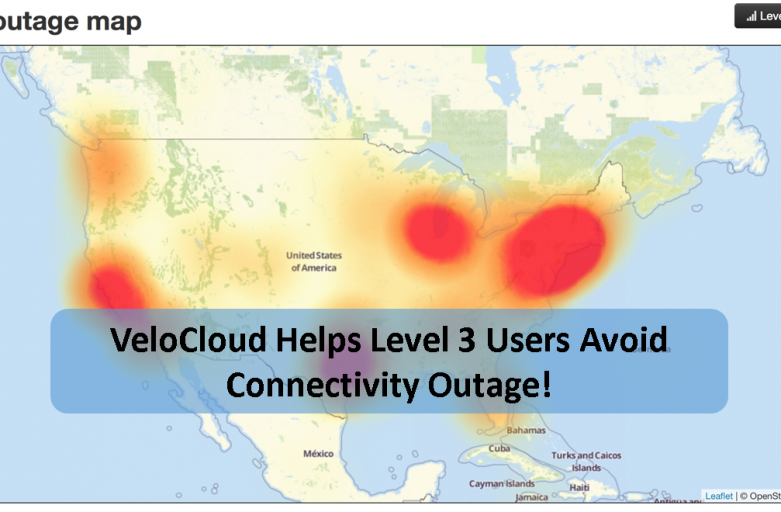 Internet connectivity is now easily one of the most critical components in a business now.  Without it, many aspects of companies would not function and result in many lost opportunities and big loss to profit.  One such example would be what happened on November 6, in which Level 3 an ISP backbone used by many internet providers in the US went offline for 90 minutes.  This was a disaster to many as they panicked due to the huge impact it had to their business and livelihood.  However, this was not the case for SD-WAN users. In fact, many VeloCloud users were not even aware of an internet blackout until the next day.  This is thanks to VeloCloud’s Dynamic Multipath Optimization.

With Dynamic Multipath Optimization (DMPO), all transport links are monitored on a continuous basis and when issues arise, traffic is steered proactively, dynamically and automatically on a sub-second basis to an alternative transport path(s).  This dynamic steering was what prevented VeloCloud users from experiencing the 90-minute blackout other Level 3 subscribers felt.  VeloCloud’s sub-second steering allows independent decisions in both uplink and downlink directions without introducing any asymmetric routing to avoid impacts from brownout or blackout conditions.

Below are some examples of the impact of the Level 3 outage on VeloCloud Cloud-Delivered SD-WAN:

First example is of a customer with dual Comcast links and a single Verizon LTE link in active mode.  From the Quality of Experience screenshot, you can clearly see the packet loss and jitter indicated by the yellow and red bands.  The long stretch of red from the Comcast links was the portion of the day when Level 3’s outage happens, the red band of course meaning there was almost no passable way for traffic to go through that link.  From the overall VeloCloud enhancement, you can see that the customer experienced almost no downtime of their connections even though the Comcast links were in the red for so long.

The second example will be a VeloCloud user who uses a broadband cable internet link and a DSL link.  The Comcast cable link again is using Level 3 as its ISP backbone.  From here, we can see an even better result as the customer had no downtime whatsoever as there was no red band after the VeloCloud enhancement even when the Comcast link had almost no connectivity it was still able to get a quality score of ever 9.94.

To learn more about how VeloCloud can help your business, please visit our product page on VeloCloud or contact us directly at 893-9515!